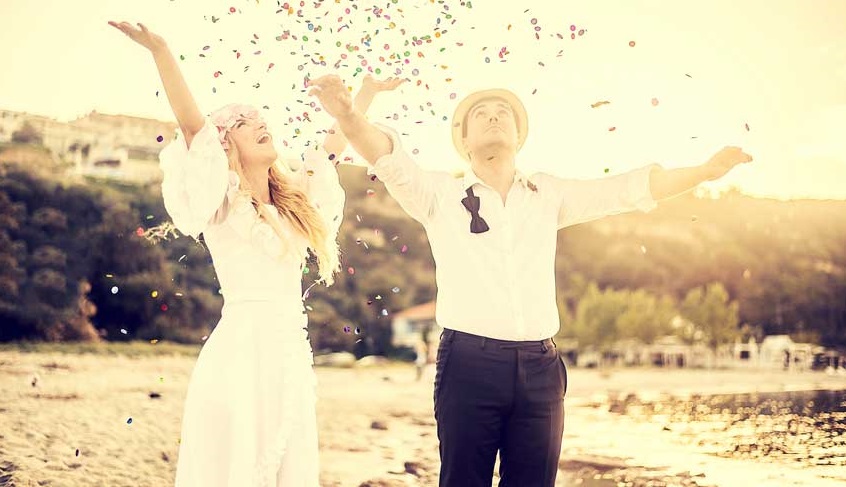 Wedding traditions and etiquette vary from generation to generation, but they also change from time to time. Here are 10 wedding etiquette traditions explained alongside their modern equivalents. It’s entirely your choice whether you snub them – or stick with them!

Traditionally, the honour of having your name go first on the wedding invitation went to the side that was hosting it, which was, typically, the bride’s family. And, even then, it was the parents’ names that went before the bride and groom’s.

Whose name is mentioned first is very much at the discretion of the couple, especially when it comes to same-sex marriage where there may be two brides or two grooms. As you can see from the wedding invitation above, many modern couples use their own names, since it is they, not their parents, who are throwing the wedding celebration – and paying for it.

Hen’s nights and/or bridal showers: who throws them?

In the past, it was the Maid of Honour that would throw the bridal shower or kitchen tea, not a family member, unless, of course, your Maid of Honour happened to be your sister! The same applies to hen’s nights, which were usually organised by one of your bridesmaids.

Though these days holding a wedding shower still tends to fall to the Maid of Honour or one (or all) of the bridesmaids, any of your loved ones can do it! It could even be a team work between your Mum and your bestie. Again, the same applies to your hen’s party.

Wedding funding: who pays for what?

In some countries, it was always the bride’s family who paid for most of the wedding – as a way to thank the groom’s family for accepting their daughter! Ehem… The groom’s family would cover the cost of the honeymoon. In other times and places, however, it was whomever had the most money and could throw the most lavish celebration.

Thankfully, sense has prevailed and, where the couple isn’t paying for the wedding themselves, it’s a 50/50 split, provided both families can afford it. Here’s a more realistic breakdown of who pays for what, according to the 2013 Easy Weddings Australian Bridal Survey:

– 47.6% of couples are sharing the wedding costs with their parents
– 42.5% of couples were paying for the wedding by themselves
-The remaining percentage said their wedding was being paid for by either one set of parents or the bride/groom separately.

Wedding gift registries have been around for a few decades but, until recently, many couples felt awkward about specifying items they’d like to receive as gifts rather than thankfully accepting whatever a guest wanted to gift couples.

Gift registries are commonplace these days and there’s no shame in letting guests know what you’d like to receive as a wedding gift, especially since many couples now live together and already own traditional wedding gifts such as bed linen, cutlery and, of course, the six-piece dining setting.

The no-kids rule: how best to say it?

An invitation to a couple with kids was assumed to include all family members, no matter how small (or big).

These days, especially given weddings tend to be charged on a per-head basis, many couples don’t invite children to their weddings, so it’s best to avoid confusion by stating clearly that a wedding invitation is for the guests listed only.

Here’s how to (tactfully) let parents know that your wedding invitation is for them alone.

The walk up the aisle: who walks the bride?

Though this remains tradition, not everyone has a father or, necessarily, has a good relationship with them, so a bride can have anyone they want walk them down the aisle, male or female. So, it could be the bride’s mother, sister, uncle, brother etc…

These days, many brides as both parents to walk her down the aisle!

Wedding attire: what guests should wear

Back in the day, it was taboo for guests to wear black to a wedding and, in some cases red, too. Of course, female guests never wore a white dress to a wedding and, male or female, you always dressed to the nines!

As with fashion globally, things are a lot less formal these days and, depending on the wedding’s dress code, you may even find guests in shorts, as well as others sporting their favorite LBD or, for that matter, their chic little red dress! One rule that hasn’t really changed is that about wearing white and shades of off-white, cream, and ivory. Best to leave that to the bride.

Wedding gifts: is it offensive to give cash?

In the past, gifts were always physical presents, usually aimed at helping the newlyweds set up home. Cash was absolutely a no-no and asking for cash was frowned upon even more so!

Today, with so many couples living together before they marry, many of them already have their homes set up, so the traditional wedding gifts of cutlery, crockery and bed linen are redundant. As such, many couples now request cash, that can be put towards something they truly want or need, such as a honeymoon – or, even, a house deposit.

Cash gifts are usually given via a physical wishing well or an online one.

For those struggling with how to ask guests to donate to a wishing well, here are some fun and polite ways to do so.