All we can say is, ‘wow!’ This amazing cake acts as a blank canvas for some rather dazzling light shows, so it truly will be a ‘centrepiece’ at your wedding. Oh, and, yes, you can have your whiz-bang tech cake – and eat it too.

It’s the latest offering from Australian audio-visual effects specialists WooHah Productions, who were behind some of the latest light shows and productions for the Logies television awards and the Nickelodeon Kids’ Choice Awards.

WooHah’s Managing Director Arosh Fernando says he and his team have been working on the technology for about six months and, that though there are other seemingly similar offerings available, none are created with this level of precision and, generally, only project images roughly on the cake and around it.

Arosh, a former wedding DJ who started WooHah Productions as a 16-year-old 14 years ago, says the technology, known as Cake Mapping, allows his team to project images onto a cake – and only on the cake, right down to the centimetre.

“As long as the cake is square and white, we can project most anything onto it,” says Arosh who has DJ’d at the 2013 Grand Final and was responsible for much of the pool-side and court-side audio entertainment at the 2006 Commonwealth Games in Melbourne.

“It doesn’t even matter how big it is!”

Couples need only purchase a white cake of any size and provide Arosh’s team with the exact dimensions. They will then work with the couple to create a custom light show (and even slideshow), complete with photos and video for display on the couple’s big day – and couples can create different light shows tailored for all the big moments during the wedding reception.

“All up, it takes about 20 hours to create a custom show, but the effect is worth it, don’t you think?” says Arosh who has used the same technology to put on similar shows for the likes of Volvo and Audi who wanted light shows projected onto new cars at various automobile shows.

Once the wedding cake is in place at the reception venue, three projectors are fixed into place, ready for a spectacular light show. Setup takes about two hours.

“Cake mapping offers some serious ‘wow’ factor and it’s definitely not something  you’ll see at every single other wedding you attend,” adds Arosh, “and that’s pretty special!” 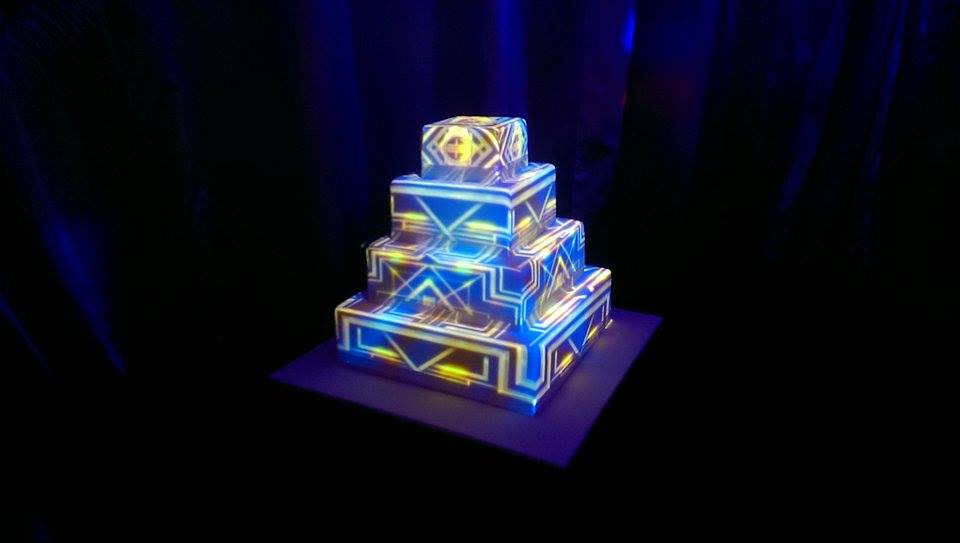