In a wedding to remember, amputee Kevin Taylor surprises his bride-to-be by going against all odds and learning to walk on a prosthetic limb at their wedding.

More than 13 years ago, a seemingly routine leg break left Kevin Taylor with a life-long disability and turned his life upside down.

Rather than a normally swift recovery, he instead developed the rare nerve-related disorder known as Reflex Sympathetic Dystrophy (RSD). His doctor’s said it was the worst they’d ever seen and as a result he would to lose his leg.

“The most remarkable thing about Kevin is that he never complained, despite what happened to him” said his friends; who knew the resilience and strength of the otherwise strong man. There was no doubting the injury had changed his life forever.

When he met the love of his life, the wheelchair was seemingly invisible. “I came in, he turned around and was just grinning from ear to ear. There was a connection immediately,” recounts another friend.

It would take more than that to turn his Texan beau off, and the pair decided to get married. Where the bride was planning the ceremony, Kevin was planning a whole different affair.

In a touching video, we see the ivory-clad bride enter the room on the arm of her father, the priest begin the ceremony as usual, and when the command is given to stand, that is exactly what the groom does! 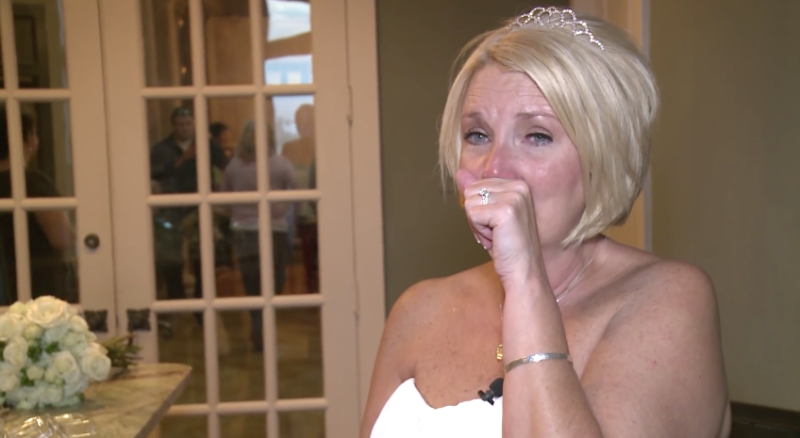 For months he had been working with a physiotherapist to use a prosthetic leg, and the long hours eventually overcame the almost impossible task and excruciating pain.

He was able to stand with his soon-to-be wife, tears rolling down her face, as the pair said their vows and were married. His dedication and hard work meant that the two soul-mates could get married while looking each other in the eyes.