Indian weddings are the epitome of glam. The bright colours, the longstanding traditions, and a sprinkling of good-humoured fun thrown in for good measure make them a feast for all of the senses.

Indian weddings are traditionally held over three days and are composed of three main ceremonies – the Misri, Sangeet Party, and the Mehendi. There are a host of other unique Indian wedding traditions that will amaze you: 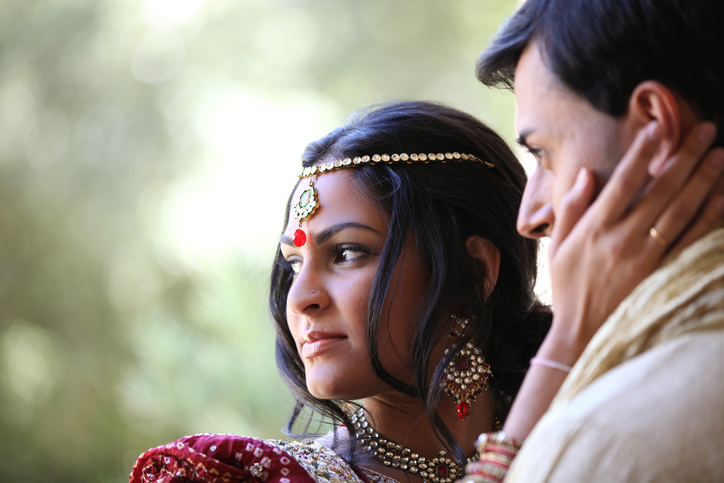 The Misri ceremony is held a few days before the wedding and is where the soon-to-be newlyweds exchange prayers, flower garlands and gold rings.

The groom’s parents also bring a basket of gifts for the bride, with the key component being the Misri, which is rock sugar, as a wish for sweetness in their married life.

This party can be a stand-alone event, or be connected with the Mehendi ceremony. The Sangeet is a celebration where both families get together to sing and dance. This can be restricted to just the women, or open for all to enjoy.

Only the women in the families attend the Mehendi, which is probably the most recognised Indian wedding tradition. It is where the bride has her hands and feet adorned with intricate henna designs, which signify the bond between her and her future husband. Once the ceremony is finished and the parents give the bride away, they do not eat again before the wedding to remain pure. 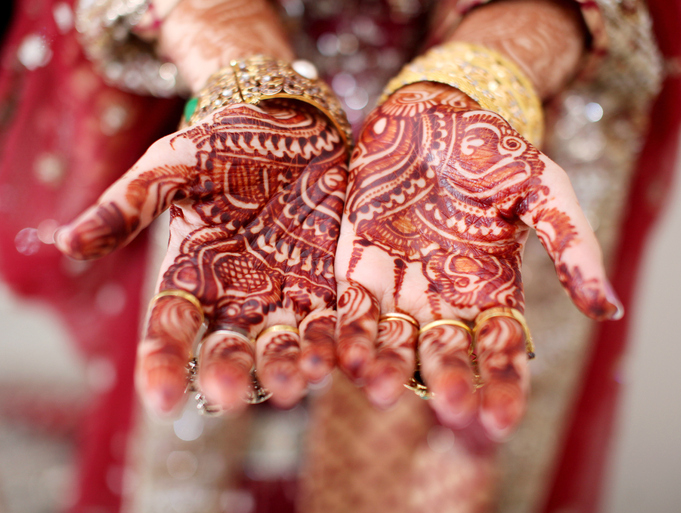 Before the couple is married, they go through the Haldi ceremony, which is where their families gather to spread oil, water, and turmeric over the couple. The mixture goes everywhere, over their skin and clothes, and is believed to bless the couple. It also has the double effect of moisturizing their skin before the wedding later that day.

There is no something white when it comes to Indian brides, in fact, they tend to favour deep reds, vibrant yellows, and bold oranges. This is steeped in Hindu tradition, where the sari should be brightly coloured and embellished with gold elements to symbolise commitment, spirituality, and fertility.

An Indian bride adhering to tradition will wear a 16-piece outfit that includes makeup, jewellery, and clothes. The most recognisable is the Mangtikka, a jewel worn on the forehead.

Fabric colours for her sari and the groom’s attire is largely dictated by the region they are from. The groom traditionally wears a turban adorned with flowers to ward off bad spirits and special type of shoe called a Sherwani and Mojari.

When the big moment comes, the couple are married under a Mandap, a four-pillared canopy, which is decorated with bright colours that often match the stunning outfits the couple select. This is built on the morning of the wedding ceremony.

On the morning of the wedding, the groom visits the home of his future in-laws, where his future mother-in-law will wash his feet and offer him milk and honey. While this is underway, his future sister-in-law will try to steal his shoes! If she is successful in this game of Jutti Chupai, the groom must pay her to get them back in time for the ceremony.

The agni, or holy fire, is central to an Indian wedding ceremony. It acts as a witness and is the centerpiece of the day. During the ceremony, the couple take seven steps around the fire and recite the Hindu pledge of marriage

The Laja homa is carried out during the ceremony and is where the brother of the bride pours rice into her hands. The groom has his hands cupped underneath and some of the rice will spill into his hands before slipping into the sacred fire. 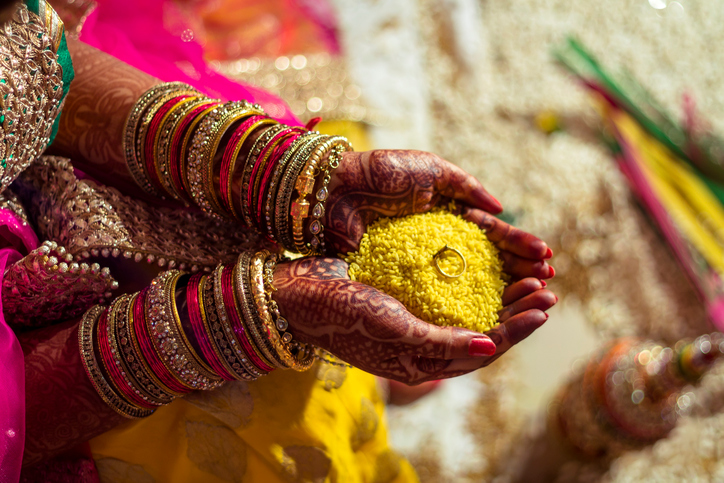 For Indian couples that are marrying under the Hindu tradition, instead of exchanging rings, the groom ties a mangalsultra (necklace with two gold pendants) around his bride’s neck with three knots. This is to represent a strong, century-long union and like rings in the Western world, this is the symbol of an Indian woman’s marital status.

One fun ceremony is called mangal pheras. This is when the bride and groom circle the sacred fire four times to represent dharma, artha, kama, and moksha and they run to their seats—whoever gets there first will rule the household.

In this part of the ceremony, the groom assists his bride to touch seven betel nuts, which are considered a holy plant in India, with her right toe while they recite seven vows. Once this is complete, seven married women from the bride’s family come up to the couple and whisper blessings in the bride’s right ear before she is carried out by her brothers. 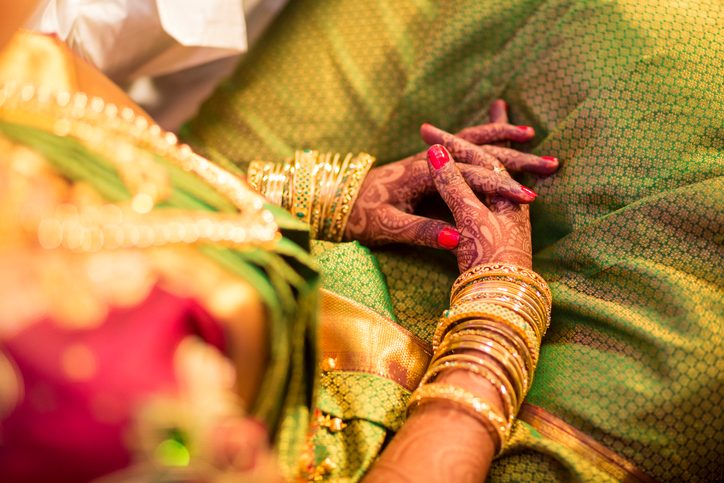 The bride is taken to her new husband’s home, but before the couple enter, they are sprayed with salt water to banish evil, and then the bride’s first steps in the home are taken after she has dipped her feet into a mixture of milk and vermillion. This means she leaves red footprints on the floor to summon the Hindu goddess of love, beauty, and fortune – Lakshmi. Lastly, the bride spills a bowl of rice with her right foot to attract wealth and to show that she is ready to take on her new responsibilities.

Who is the head of the household?

Some families include the Aeki Beki in the newlyweds’ homecoming. This is where a similar mixture of milk and vermillion is made in a bowl and filled with coins and a ring. The couple takes turns to search for the ring and whoever finds it four out of seven times will become the head of the household. The wedding day is finalised with prayers seeking love and happiness for the newlyweds. 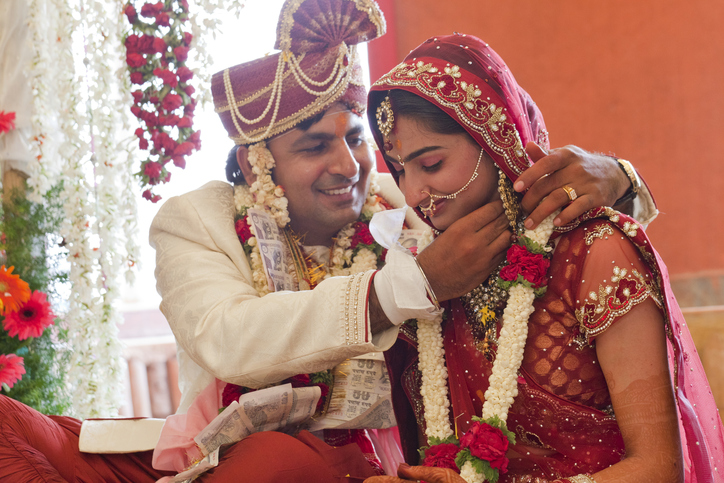 Read related: 15 Russian wedding traditions you may not know