December 12, 2012. It’s the last truly unique date of the century and couples are clamouring to make their way up the aisle in order to claim 12/12/12 as their wedding date.

Though, traditionally, Friday, Saturday and Sunday are the most popular days on which to wed, thousands of couples across the globe have booked today, Wednesday, December 12, 2012, as their wedding day.

In Australia, a record number of couples have signed up to marry today with more than 120 marrying in Sydney and its surrounds alone. In other parts of the world, the 12/12/12 wedding boom continues.

In Hong Kong, nearly 700 couples, (that’s more than four times the normal number) have registered to marry today, while Singapore, too, is also experiencing a significant increase in wedding.

They’ve reported an eight-fold increase in the daily average of non-Muslim weddings easily making today their biggest day for weddings this year.

In the UK, some celebrants are reporting a 15 per cent increase in requests for 12/12/12 wedding ceremonies and many of Las Vegas’ famed quickie wedding chapels are holding super specials for couples wanting an impromptu wedding ceremony.

12/12/12 represents the last time this century that the day, month and year will match and it offers couples who want a truly memorable date a once-in-a-lifetime opportunity.

It appears the numbers will even outdo last year’s 11/11/11 wedding day frenzy. 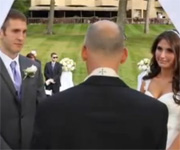 “We chose 12/12/12 because it’s the last significant date of the century,’’ says Heidi, an EasyWeddings.com.au who will marry Chris, her partner of 10 years, in Melbourne today.

Heidi, who will don a 1950’s inspired gown says the theme for the day is racewear, which is perfect for a an afternoon wedding, complete with high tea.

She and Chris were suprised that despite holding the wedding on a Wednesday (and so close to Christmas holidays), 106 of the 112 people invited said yes.

They’ve even have friends and relatives jetting in from interstate and overseas.

The couple’s celebrant David Schneider says he is performing multiple ceremonies today, like so many of his colleagues.

“It’s also very easy to remember. So, there shouldn’t be any excuses for forgetting your own wedding anniversary in years to come!”