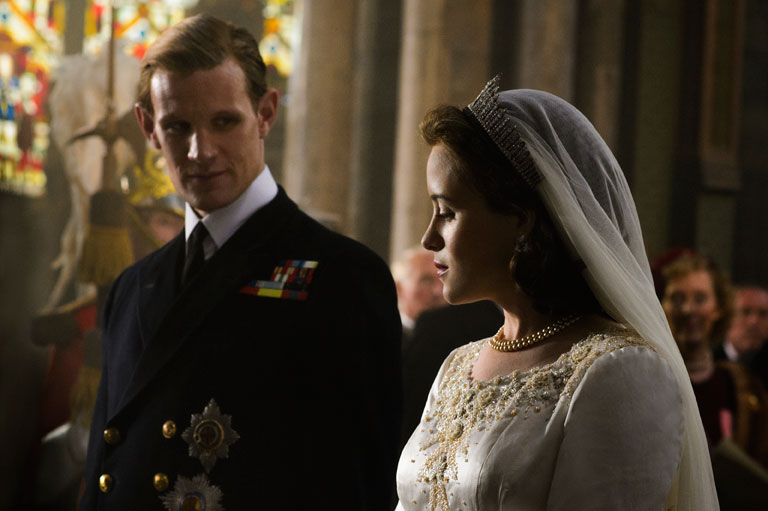 The sumptuous wedding of the Queen and Prince Philip in 1947 was attended by more than  2,000 guests, and viewed by an empire of 20 million people around the globe. Now, a Netflix original series starring an all-star cast will bring the inside story of Queen Elizabeth’s decade-spanning reign to life.

Every detail from the wedding dress to the Irish stage coach has been included, in a series set to span the entire life of Queen Elizabeth, culminating in present day. The Crown will focus on two of the most famous locations in the United Kingdom, 10 Downing Street and Buckingham Palace, as viewers are taken on a journey through the 60 year reign of our monarch.

The production is tipped to have cost Netflix a staggering £100 million to make and features the cream of period-style actors and actresses. These include Claire Foy as Queen Elizabeth, the second royal in her career after her portrayal of Anne Boleyn in the BBC2 adaptation of Hilary Mantel’s Wolf Hall.

The Duke of Edinburgh Philip Mountbatten will be brought to life by a former Dr Who, Matt Smith, with Sir Winston Churchill being played by Third Rock from the Sun actor, John Lithgow.

In the first series, landmark events such as the marriage of Queen Elizabeth and Philip have been lovingly replicated. From the Norman-Hartnell dress to the grandeur of Ely Cathedral in Cambridge, no detail has been spared from the meticulous eye of director Stephen Daldry, known for Billy Elliot and The Hours. Foy’s hair has even been crimped to replicate Elizabeth’s signature style.

The stunning nuptials of the Queen and the Prince, who met in 1934 at the wedding of Princess Marina, will include contemporary references including King George VI, the Queen’s father. The Crown has been described as “the inside story of two of the most famous addresses in the world – Buckingham Palace and 10 Downing Street – and the intrigues, love lives and machinations behind the great events that shaped the second half of the 20th century.”

The period drama is set to debut its first 10 episodes in mid-2016, and is inspired by the Peter Morgan stage production The Audience. Helen Mirren appeared as the queen in that breakout performance; with producers of The Crown stating that Claire Foy will be secure in the role for the first few seasons. They may look to replace the actress as time progresses and the character ages.

The Crown will be produced by Left Bank Pictures, working in association with titans Sony Pictures Television, and have an executive production team including Andy Harries (The Queen), Suzanne Mackie (Calendar Girls and Mad Dogs), and contributing writer Peter Morgan.

We can’t wait to see the wedding in all its vintage glory!

The Queen and Prince Philip celebrate…

The Queen celebrates 65 years of…