Miley Cyrus was photographed at JFK airport in New York wearing a diamond ring on her wedding finger. Image: XPOSURE via Daily Mail

Pop star Miley Cyrus has teased social media fans by posting a picture of herself wearing what looks to be her old engagement ring, the one given to her by former fiance Liam Hemsworth, whom she’s dating again.

Miley, 23, posted the below image to her Instagram account following her reunion with her ex-fiance, Australian actor Liam Hemsworth, 26.

In the photo, the Wrecking Ball songstress wears a pink and green ensemble which she accessorises with a gold diamond ring – on her wedding finger.

It’s clear that the ‘We Can’t Stop‘ singer is making no effort to disguise the 3.5-carat cushion-cut diamond ring , which looks exactly like the ring Liam proposed to her with in 2012. Given the couple are back together – and that Miley recently moved into Liam’s Malibu house – it’s little wonder that there is speculation of a re-engagement.

Miley Cyrus posted a bathroom selfie of herself wearing what appears to be her old enagagement ring on her wedding finger. Image: Miley Cyrus via Instagram

The media savvy pop star has also been photographed wearing the same ring arriving at JFK airport in New York and again the following day, still wearing the gold sparkler on her wedding finger. 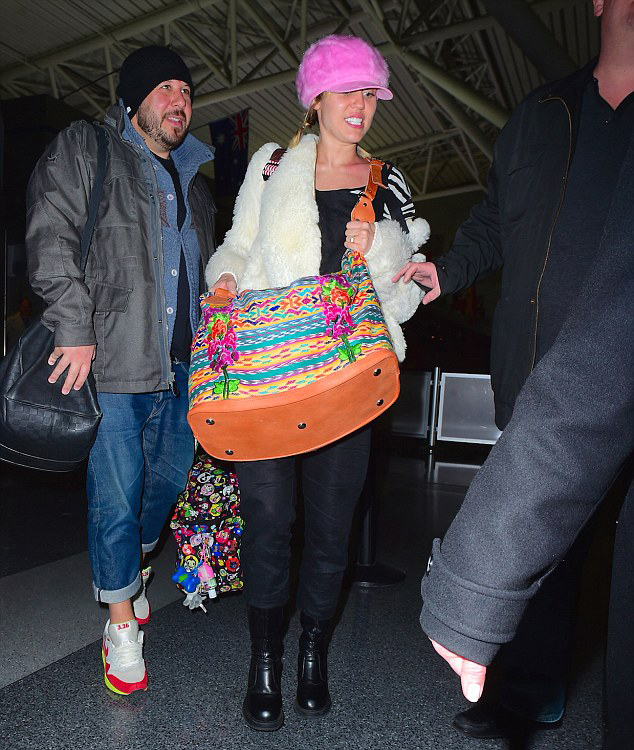 Miley arrives in New York wearing a ring that looks suspiciously like the one Liam gave her. Image: 247PAPS.TV/Splash News via Daily Mail

Miley and Liam, who famously ended their engagement in 2013 after being together for almost four years, were seen together over New Year’s Eve, as Miley attended Australian music festival Falls Festival with Liam and his family.

The couple are yet to confirm whether or not they are engaged, but, even if they’re not, we love seeing these two lovebirds back together! Good luck to them both!

Elsa Pataky, Liam’s sister-in-law and wife of Thor actor Chris Hemsworth, posted this image of herself and Miley with friends during their celebrations at Falls Festival on New Year’s Eve. Image: Elsa Pataky via Instagram

Looks similar: Miley’s engagement ring from 2012 is exactly the same as the ring she’s been wearing . Image: WireImage via Daily Mail